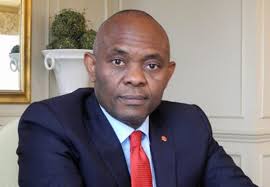 it is had to think of a more respected individual in the banking sector in Nigeria than the former UBA chairman. Besides the bank, he is also an entrepreneur and a philanthropist. Furthermore, he is the founder of Heirs Holding, The Tony Elumelu Foundation. He was born in Jos, the plateau state capital in 1963.

He attended Ambrose Alli, University, Delta State University, and Harvard Business School. He is listed in Time magazine’s 100 Most Influential people of 2020.

Mr. Tony Elumelu was born in 1963 in Jos, Plateau state capital, Nigeria. However, he is from Aniocha North Local Government Area of Delta State. He studied economics and obtained his Bachelor’s degree from Ambrose Alli University and a Master’s degree from the University of Lagos.

He got married to Vivian Elumelu, a medical doctor in 1993. They have seven children. He has a younger brother who is a member of the Federal House of Representatives in Nigeria – Ndudi Elumelu. He is also the Minority Leader of the lower house of parliament.

He began his career in Union Bank as a Corp member in 1985. He retired from the United Bank For Africa (UBA) in 2010 and established Heirs Holdings. This holding has business interest in energy, agriculture, medical care, etc.

He has continued to work for the interest of Nigerians in different capacities. Also, he worked in Standard Trust Bank.

He fills as an adviser to the USAID’s Private Capital Group for Africa. Also, he is a member of the Nigerian President’s Agricultural Transformation Implementation Council (ATIC). He is the co-chair of the Aspen Institute Dialog Series on Global Food Security.

Furthermore, he was on the seat of the 26th World Economic Forum on Africa in Kigali, the capital of Rwanda. This event was held between the 11th and 13th of May, 2016.

Tony Elumelu is an ex-student of the Advanced Management Program of Harvard Business School.  He is a business analyst and an altruist. He holds the national honor of Member of the order of the Federal Republic (MFR).

He has a range of sophisticated automobiles such as Range Rover, Mercedes-Benz S-Class among others. Also, he owns a host of houses around the country. Furthermore, he owns several estates and real estate investments both in Nigeria, and other countries.

The foundation was established in 2010. Its headquarters is in Lagos State, Nigeria. The purpose of the foundation was to empower entrepreneurs in Africa to help them contribute meaningfully to the development of the continent.

The foundation is determined to chart a new path for an African charity. Also, the foundation does not operate on the idea of a grant-giving organization. However, it aims to provide an effective system that provides intensive support to entrepreneurs by following its 7-pillar ideology.

This foundation is the forerunner member of the global impact Investment Rating System (GIIRS). Presently, the foundation has provided grants to over 7,500 people in Africa. This number comes from over 50 countries within the continent. To know more about the history of this foundation, click here.

Some of the foundation programs include an annual conference created to bring entrepreneurs within Africa together. So they can interact, share ideas. Also, it is a platform for interaction between the public sector and the private sector. You can learn more about the programs of the foundation here