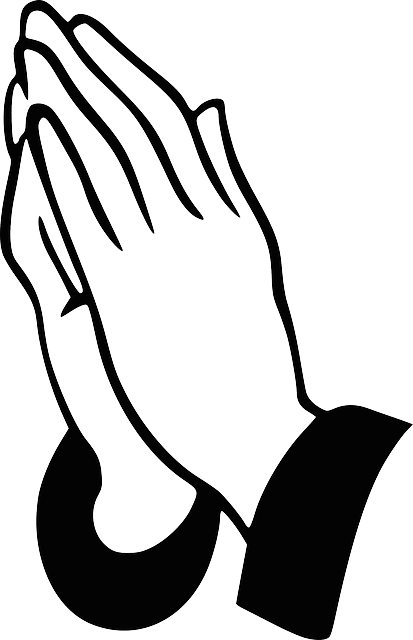 The old Nigeria was dominated by the traditional religion, popularly called the African Traditional Religion. These religions are the beliefs and practices of Africans. This is pure tradition and mainly indigenous to Africa, and for Africans.

Today, Nigeria has become the most populous country in Africa, with a population of up to 200 million. Religion in Nigeria today is almost equally divided between Islam and Christianity. Other religion asides these two remain minor.

The Protestant Christians dominate Christianity in Nigeria, Catholic represents up to a quarter of this religion population.

Yes, Nigeria’s population is large, but don’t think only Islam and Christianity account for the religion in the country. There are other types of faith and beliefs in Nigeria.

With over 350 ethnic groups plus over 500 languages, it will be wrong to assume that only two religion exist in face of this diversity of ethnicities, cultures and beliefs.

In Nigeria, different parts of the country belong to different religions.

Under Christianity, we have Protestant, Catholic, Anglican, Orthodox Christians and other branches of churches.

* Chrislam. This is a blend of Christianity and Islam, using both the Quran and the Bible as the basis of practice.

* The Reformed Ogboni Fraternity. This fraternity is based on ancient usages, rites and customs.

Religion has been one of the major cause of the struggle in Nigeria. There have been deep roots of religion in different tribes of Nigeria, before colonization.

The Hausa/Fulani Religion in Pre-Colonial Nigeria

One of the most prominent tribes in Nigeria is the Hausa/Fulani tribe. Today, this tribe is the major representative of Islam in Nigeria.

The Hausa tribe had her own Traditional African Beliefs, known as Maguzawa.

So far, Hausa remains the least to be influenced by the traditional religious beliefs in the country – as a result of Islam. The Hausas accepted and supported the Muslims when they came to Hausaland around the 11th century. The religion was brought to them by traders from Mali, North Africa, and Guinea.

The Hausas was able to achieve a dominant tribe in West Africa partly due to the Islam religion.

The Igbo Religion in Pre-Colonial Nigeria

Before colonization in Nigeria, the Igbos used to believe in Odinani – the common name for the traditional religion.

A monotheistic attribute of this religion was its major characteristics.

In this traditional religion, only one God is believed, delegating some powers to other spirits.

To some extent, this religious belief is similar to the Christian cosmology.

The Igbos believed that there is only one God, called Chineke, who was the original creator of things on Earth and above.

There was also a belief that this world was divided into two, the Human and the Spirit world. Humans are to travel to the Spirit world after death, according to their belief.

The Yoruba Religion in Pre-Colonial Nigeria

Till date, the Yoruba tribe still exalts its traditional religious practices and believes it has a connection with culture and other colonial religion in Nigeria.

A popular Yoruba religion is called Ifa. It is a system of divination. The literary corpus of Ifa is the Odu Ifá.

Here, Orunmila is referred to as the Grand Priest. It was him who revealed divinity and the prophecy to the world.

A key element of the Yoruba religion is destiny (Ayanmo), possessed by all humans.

Eledumare, Olofi and Olorun are different names for common gods in the Yoruba religion. 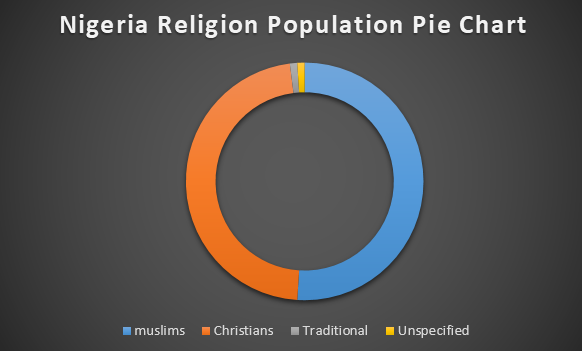 A study in 2018 estimated that the population of Muslims in Nigeria is 53%. Roman Catholic has 10.6% of the population, and it was 35.3% for Christians. Others, including the no-religion population is just 6%. 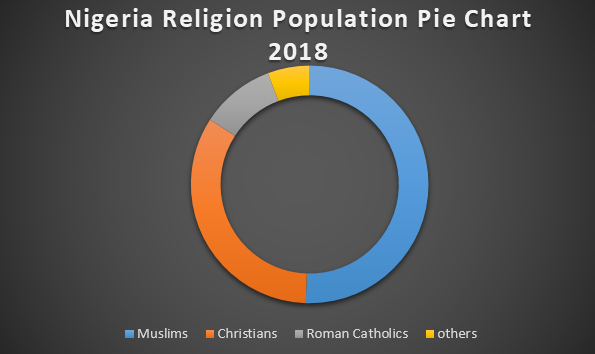 As of 2016, Nigeria was the 6th largest nation in the world where Christianity religion is being practised. For Islamic largest population worldwide, Nigeria is 5th.

Christians have a percentage of 49.3 while it was 48.8% for the Muslims. The remaining 2% are other religions (or no religion). 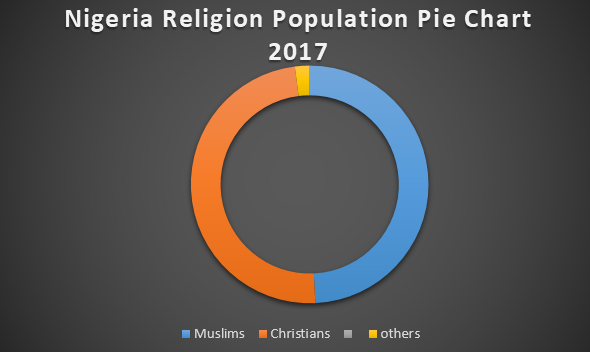 The Hausa ethnic group in the northern part of Nigeria has the highest followers of Islam in Nigeria.

For the Yorubas in the West (Ondo, Osun, Oyo, Ogun and Lagos), religion is divided, among Christianity, Islam, and Traditional religions.

In the East, the Igbos are mainly followers of Christianity (Catholics), although some still practice traditional religion. Same goes for the Ijaws in the South.

The middle belt (Abuja, Kwara, Niger, Benue) has minor ethnic groups. Most of them are Christians and some native practice traditional religion, with few Islam converts.

There has been religion conflict in Nigeria, as far back as 1953.

The most prominent one today is the violence caused by the Boko Haram insurgency. The goal is to establish an Islamic state(s) in the country. For years, damages have been done. Citizens have been abducted.

After the democratic government came into power in 1999, there has been the introduction of Sharia law into the constitution of states dominated by Muslims.

There have been different cases of religious conflict in Nigeria. In 1966, the Igbos in the North were massacred. This caused tension the local Muslims and the Igbos. It was the major factor that led to a civil war.

Till date, the heat of religious conflict in Nigeria continues.