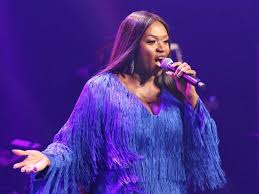 Waje is currently a single mother of one. The name of her daughter is Emerald Ogochukwu Iruobe. Emerald is such a beauty to behold. She is now 21 years old. Waje recently posted some photos and a short video of her daughter on her Instagram page and wished her greatness on her 21st birthday.

The music star is very fond of her daughter. Waje made efforts in raising Emerald to grow into good moral standards. One way she enforces this discipline in her daughter was to never introduce any of her male friends to her daughter. The reason was that she doesn’t want to raise her child up in an environment that makes it seem cool to have men come in and out of her life. That’s her personal opinion anyway.

The music artist got pregnant when she was just 17 years old. She gave birth to Emerald more than two decades ago.

Sometime in 2018, July 12 to be precise, Waje collaborated with Timaya. They cooked and delivered a song titled ‘Kpolongo’. The song was a hit.

Her real name is Aituaje Aina Vivian Ebele Iruobe. Waje is one of the most talented singers in Nigeria. She is also a songwriter and actress. So what’s the really the meaning of WAJE, according to her? WAJE is an acronym – Words Aren’t Just Enough. And yes, if you ever listened to the singer’s songs, you can confirm that – words aren’t just enough to fully describe the potential of her vocals. Also, “Waje” is a word for laughter in her native tongue.

Waje was born in Akure, Ondo State, on the 1st of September, 1980. Her family relocated to Benin City, Edo State. Waje is of Igbo descent. While she was still tender, her parents divorced.

While growing up, Waje went to the Word of Faith Group of Schools. Back then, she has exceptional vocals. While in the choir, she got the heart of late Benson Idahosa, of the Church of God Mission International. This made the Archbishop sponsor her education, while she was still in the Secondary School.

Waje still sang greatly during her University days. The music artist often performs in different shows and in school events. She is a graduate of the University of Nigeria, Nsukka, earning a difference in Social Work. The singer also had an interest in tourism while still in school.

In 2007, Waje launched her singing career in the Nigerian music industry. Her vocal strength is phenomenal. She is so gifted that she could cover 3 vocal octaves. Her favorite international vocal icons are Aretha Franklin and Whitney Houston. The remix of P Square’s “Omoge Mi” helped her launched her presence in 2007. Then, she started with free shows. By 2008, Waje became more successful with another hit track by P Square “Do Me”. Over time, P Square worked with Waje on other songs.

Waje has won the 1st runner-up in “Advanced Warning”, an MTV Base reality television show. After that, she asks featured several songs with high profile music artists in Nigeria, for example, Tiwa Savage and M.I (in his song titled ‘One Naira’). Waje has also shared the stage with international acts such as Wyclef Jean and Kerry Hilson.

Waje released her main album in 2013. This made her become a household name.

When we talk about the best vocalist Nigeria has ever produced, Waje would top the list. Her talent is so rare. The singer was able to work in different music genres successfully. She has worked on Soul, Blues, R n B, Rock, Hip-hop soul, and Pop.

Waje has sung many songs to her name. She has also featured with other top artists in the country.

Here are the top 3 songs of Waje:

Other popular songs include Coco Baby, In the Air, Oko mi, I’m Available, and Na the Way.

In 2017, Waje released a record titled “Mountain”.  The talented vocalist featured Lerato Molapo (professionally known as Lira), a singer from South Africa. Mountain was a hit.

How old is waje

Waje currently has over 1.4 million followers on her Instagram page. Her Instagram handle is @officialwaje). You can also view her page directly here: www.instagram.com/officialwaje.

Waje is a single mother of one. She is not yet married.

In a previous interview with Genevieve magazine, Waje revealed that she has been dating. The vocalist didn’t disclose who the caught was. Waje also said that she doesn’t allow her male friends to never visit her home – regardless of close, their relationship is.

For now, the beautiful vocalist is single and still mingling.