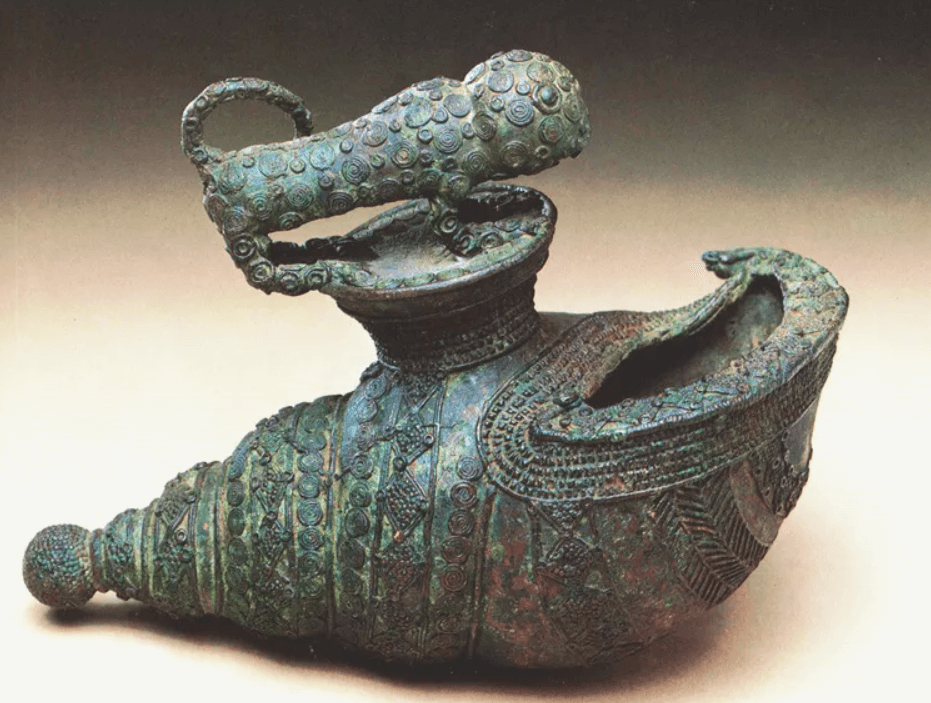 In the woodland region of southeast Nigeria, close to the contemporary town of Onitsha, is the African Iron Age archaeological site known as Igbo Ukwu. The Igbo Ukwu was utilized in the late 10th century A.D., though it is uncertain if it was a settlement, home, or burial ground.

Igbo-Ukwu was found in 1938 by workers building a cistern, and Thurston Shaw explored it in 1959–1960 and 1974. In the end, three locations were located: Igbo-Isaiah, an underground storage space; Igbo-Richard, a burial chamber that once contained the remains of six people and was lined with wooden planks and floor matting; and Igbo-Jonah, a cache of ritual and ceremonial items that were allegedly gathered during the deconstruction of a shrine.

Why the Igbo-ukwu people are so special

The Igbo-Ukwu people had a thriving metalworking culture as early as the ninth century (though this date remains controversial). Numerous ritual objects and regalia made of bronze or leaded bronze that rank among the most creative and technically complex bronzes ever manufactured have been discovered at three different sites.

The Igbo-Ukwu people, who are the progenitors of modern-day Igbo, were the first smiths in West Africa to manipulate copper and its alloys through hammering, bending, twisting, and incising. They are perhaps one of the first West African ethnic groups to use lost-wax casting methods to create bronze statues.

Oddly, it appears that Igbo smiths had a limited skill set when it came to metalworking and were unaware of methods like raising, soldering, riveting, and wire manufacturing, despite the fact that these methods were used elsewhere on the continent.

Regardless, these casters were incredibly talented. Numerous castings were created in phases. For instance, before the main components of a bronze bowl were manufactured, minor ornamental elements like spirals and insects were cast first and inserted into the wax model of the bowl, which was discovered at Igbo-Ukwu. Next, a center band was cast, which was used to join the two parts of the vessel. Many other bronze objects, including pendants, crowns and breastplates, staff ornaments, swords, and fly-whisk handles, have been discovered at Igbo-Ukwu, in addition to a wide range of ritual vessels (whose designs appear to replicate the form of gourd vessels to which metal handles have been attached).

Tens of thousands of beads, which were acquired through exchange for slaves, ivory, or spices, were also discovered with these sculptures. At the time, Igbo-Ukwu bronzeworking was a singular event, but other regions of Nigeria discovered metal casting several centuries later.

Discovery of the first Igbo-Ukwu Antiques

Three archaeological sites feature Igbo-Ukwu prominently. Some bronze artifacts from these areas, some dating back as far as the ninth century AD, were created using exquisite bronze metalworking technology. All of these things took place in Igbo-Ukwu centuries before other places began using bronze. The Igbo-Ukwu culture is the earliest known bronze casting in the area, with archaeological sites dating back to 850 AD.

Igbo Isaiah is the name of the first site where Igbo-Ukwu artifacts were found. Thursan Shaw, an archaeologist, gave it a name and later found two further sites. He gave the first place its name in honor of Chief Isaiah Anozie, a farmer who was the first to find the bronze works in his complex in 1938.

Isaiah found five metal artifacts in this very first spot. These five bronze artifacts are a ram’s head, a little staff, a crescent-shaped crafted jar, a tiny pendant in the shape of a chief’s head with marks on the face, and a large Manila. These artifacts, which Chief Isaiah Anozie first discovered, are now on display at the British Museum. It was clear that Chief Isaiah’s land was situated atop the ruins of a long-gone ceremonial shrine that had been there for more than a thousand years prior to his discovery.

This demonstrated that the Igbo-Ukwu people had a developed religious structure even before colonial domination.

The Third discoveries of the Igbo-Ukwu Antiquities

The Anozie family compound was the subject of an archaeological excavation request from the Nigerian government in 1959. As was previously mentioned, archaeologist Thurstan Shaw conducted this dig. He later found two more spots with bronze artifacts that resembled the originals first found by Chief Isaiah Anozie. He gave the names Igbo Richard and Igbo Jonah to the second and third places, respectively. He gave the locations of the Anozie brothers’ names.

Following the excavation, artifacts like ceramics, jewelry, numerous bronze, iron, and copper items, as well as the remains of an elite dressed in metal regalia, provide proof of a prominent person’s elite burial. Along with garments and elephant tusks, he also discovered a variety of glass beads. It was clear that Igbo Isaiah served as a cemetery.

The significance of the Igbo-Ukwu antiques to the Nigerian History

1. That the Igbos were affluent

These discoveries provided evidence of the Igbo’s prosperity. Additionally, it demonstrated their involvement in both domestic and foreign trade. These further demonstrated the prosperity of the Igbo-Ukwu people, who were skilled metalworkers as early as the ninth century.

Other artifacts found at the Igbo-Ukwu archaeological sites include a leopard picture, which may have symbolic significance. The forefathers of the Igbo people of today are the Igbo-Ukwu people.

2. That the Igbos were very skilled at iron works

The first coppersmiths were the Igbo-Ukwu people. These folks were some of the first in West Africa to create bronze sculptures using lost-wax casting processes.

These discoveries at the three archaeological sites demonstrate that the Igbo-Ukwu community of ancient Nigerians maintained an economy centered on agriculture and commerce with other Africans.

3. That the Igbos are experienced at visual artistry

Visual art from the ancient Igbo-Ukwu culture is abundantly preserved. Additionally, it demonstrates the Igbo-Ukwu people’s skill in crafting. In their paintings, the Igbo-Ukwu artisans embodied complex meaning. They paid close attention to details when designing and embellishing their piece of art.

The Double Egg pendant showed two eggs with a bird perched on top, each pointing downward, and was discovered among the jewelry in archaeological sites. Additionally, the surface of the photos of the eggs is decorated with small insects. The Double Egg pendant image, according to certain philosophers, represented fertility and generative power.

4. That Igbo land is an ancient technology place

The Igbo-Ukwu culture archaeological sites have provided evidence that the ancient Nigerians used their own technologies. They used metals and iron to create tools and equipment for many purposes, including farming, hunting, and others. The people of ancient Nigeria were able to make their own weapons.

5. That the Igbos were prospering long before the colonial masters came

The Igbo-Ukwu culture’s place in Nigerian history also demonstrates that the indigenous inhabitants of Nigeria had a stable way of life and were prospering long before the arrival of the colonial rulers. Bronze artifacts found in various archaeological sites contributed to the promotion of the Nigerian people’s history and culture to the outside world because they were kept in the British Museum.