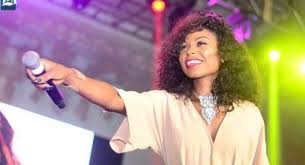 Her real name is Eniola Akinbo, she hails from Ilesha, Osun State. Niyola is a Nigerian singer, songwriter, stage performer, model, recording artist, and philanthropist. The popular singer was born on the 9th of December, 1985, in Lagos State.

Mariah Carey is her role model according to her. Niyola is the last child in a family of ten children. The singer completed her primary and secondary school education in Lagos State. She later proceeded to the Independent Journalism Center. Here, Niyola studied Journalism and earned a certificate in Journalism. She furthers her education and went to the University of Lagos. Niyola bagged a Bachelor’s Degree in the English Language.

Niyola developed a high interest in music when she was only 8 years old. Back then, she practiced her singing skills by singing in her local church choir group. She sang in the church with her siblings. Niyola was inspired to pursue a career in music when she attended Funmi Adams concert in Lagos State.

In 2000, Niyola started on her musical career professionally. This was after she was the 1st at the Amen Starlet Competition. In 2005, the singer was briefly affiliated with eLDee’s Trybe Records label. She later signed a production deal with Freestyle’s Make-Sum Noise Entertainment. This was where she released her first three-hit singles titled “Me n U (In da club)”, “Dem Say”, and “No More”.

Later, she got signed to Westside Music label and released her first debut studio album containing the smash hits “Bring it on” and “Call my name” music that earned her two nominations that year at the Hip Hop World Awards.

Overtime, Niyola worked with several labels and received awards. She has also performed at different major events – such as the Calabar festival in Cross Rivers State, tour with CELTEL(Airtel) 2008, Akon concert in Lagos State, Y’hello Festival (along with Sasha), and many more. Niyola also took part in the Ovation Red Carol theme song in 2009.

Niyola was signed to Empire Mates Entertainment (EME) by Banky W in 2012. She was popularly referred to as the 1st lady of EME. Since then, she has worked with several artists such as Banky W, Wizkid, Sasha P, Skales, Sound Sultan, Lynxxx, Paul Play, and other popular celebrities in Nigeria.

There were once rumors that the female singer was in a romantic affair with Banky W. Niyola debunked the rumors during an interview with the media – she revealed she still single. The gifted singer released her first hit single “Toh Bad” in 2013, under the EME music label.

Niyola currently has a net worth of $1.5. She is one of the richest female singers in Nigeria.

The Instagram handle of Niyola is @niyola. She currently has more than 200,000 followers on her page. Follow this link to reach her Instagram page directly: www.instagram.com/niyola.

After many years of singing, Niyola has dropped different hit songs. Below are some of her songs.

2015, Niyola dropped another hit song titled “Go On”. Go On turned to be on the favorite playlist of many music lovers.