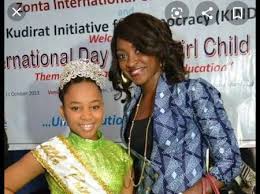 Kate Henshaw is a talented Nollywood actress born in Calabar, Cross River State, Nigeria. The actress was born on the 19th of July, 1971. In 2018, Kate won the Africa Movie Academy Award for Best Actress in a Leading Role. Kate Henshaw’s performance in the movie title “Stronger than Pain” got her the prestigious award.

Kate was born into a family of six, 4 children, and her parents. She is the first child of her parents. Her primary and secondary education was in Lagos State and Cross River State. She had her remedial studies at the University of Calabar, it lasted for one year. She proceeded to the Medical Microbiology at the School of Medical Lab Science. Then Kate later went to the Lagos University Teaching Hospital (LUTH) in Lagos State. She has also worked at the Bauchi State General hospital. Kate Henshaw was also into modeling before becoming an actress. While a model, shd once featured in a print and TV advert for Shield Deodorant. She also featured in different commercials.

In 1993, Kate won a role in a movie audition. She took part in the lead role of the movie titled “When the Sun Sets”. The movie was her first appearance in a major Nollywood movie. Kate has since then appeared in over 60 Nollywood movies.

How old is Kate Henshaw (age)

Kate Henshaw was born on 19 July 1971. She is currently 49 years old. Kate was born and raised in Calabar, Cross River State.

Kate was once married to Roderick James Nuttal. They were together for 12 years and seemed to be quite happy until they had a misunderstanding and broke up in 2011. The actress has a daughter, named Gabrielle Nutall.

Kate Henshaw’s ex-husband’s name is Roderick James Nuttal. The couple lived together for 12 years, and their union was blessed with a daughter named Gabrielle Nuttal. They were happy together in their marriage, but things go bad between them and they had to divorce in 2911. The reason for their break-up was on adultery ground.

Roderick Nuttal is the Managing Director of Ledrop Nigeria Ltd. He has begun a new page of his life after he divorced Kate, and he has remarried.

During the break-up of this couple, different rumors were spread about them. According to a source, it was said that Roderick was carried away by his secretary, Angela Gordon. And that the woman was the main reason for the family’s destruction. For a while, the relationship was kept secret until Kate started to suspect infidelity. It was then that Kate unexpectedly came to her husband’s office, even though she had earlier told him that she was going to a location in Lekki. That was how it was all exposed to her face – the confirmation of her worst fears.

Kate Henshaw’s husband is in the past now. She said this was one of the situations that made her start something new than to wish and try to correct something of the past. She also added that she did not regret having her child. Kate is very happy giving birth to Gabrielle from the marriage. This is one of her most important achievements in life, according to her.

Kate is a mother of one. She gave birth to her beautiful baby girl in the early 2000s. She regards Gabrielle Nuttal as her greatest achievement and has done all she could to protect and provide for her. As a result, there is limited information about Henshaw’s daughter.

Kate Henshaw is currently one of the richest Nollywood actresses in Nigeria. She was estimated to have a net worth of more than $1 million USD

Kate Henshaw had a house in Lekki Phase 1 area of Lagos State. The house caught fire on June 25, 2015, around 8:36 pm. It was reported that the fire started around 3 pm and neighbors struggled to put out the fire. According to some witnesses, the outbreak might have been caused by an electric surge.

Kate Henshaw-Nuttal has featured in many Nollywood movies. She has also received several awards. Below are the top 3 if her movies: