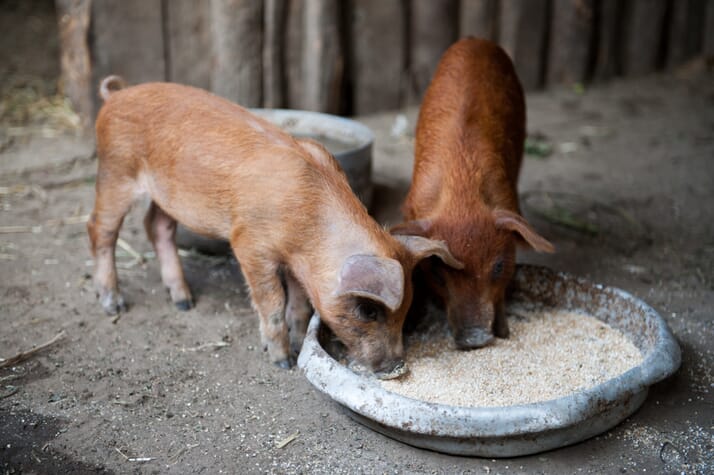 The goal of every pig farmer is to see how he can cut costs considerably, especially as it relates to feeding in order to gain more profit.

While Pig farming can be lucrative, the rise of food commodities is threatening piggery. As a result, most pig farmers have been forced to look for sustainable means to feed their pigs.

The unreliability of the supply of beef and chicken has created a very big market share for pig farmers.

When it comes to feeding, pigs are a bit flexible because they can consume several varieties of food products thereby giving pig farmers a wide range of choices in the matter of feeding.

Contents hide
1 What is the cheapest way to feed pigs?
2 How much is a bag of pig feed?
3 How much does it cost to feed a pig for a day?
4 What is the cost of pigs in Nigeria?
4.1 Author Profile
4.1.1 Latest entries
4.2 Related

What is the cheapest way to feed pigs?

Due to the high cost of commodities such as maize and other constituents of the feeds, pig farmers have been forced to look for innovative ways in which they can get cheap and at the same time healthy feeds for their pigs. One of the ways you can feed your pigs in a far cheaper way is by doing the following:

Ferment your feeds with homemade probiotics: This is one of the sure ways of reducing feeding costs. When you ferment your pig feeds with homemade probiotics, it will reduce the feeding cost, increase the FCR rate of your pigs and also ease digestion of food by your pigs. Another way of fermenting your feed is by compounding it with hydroponics fodders.

Advantages of growing your hypersonic fodder

Palm Kernels: This is another important and cheap source of feeding for pigs. The shells of Palm kernels are most times disposed of by the locals and can be used as a viable source of feeds for pigs. Most times you don’t get to buy this because it is thrown away by locals.

Cassava: Cassava is gradually emerging as a feeding source for pig farmers in Nigeria (See where to sell your pigs in Nigeria). in the past few years, Pig farmers were skeptical of deploying raw Cassava as a feed source due to the toxic cyanogenic glucosides present in raw cassava. This has been defeated with the invention of advanced processing systems.

Silage: This is another method of producing cheap feed by fermenting fodder in an anaerobic condition. Silage production has brought a lot of benefits to farmers because they can be stored for a long time and be reused anytime the need arises.

How much is a bag of pig feed?

Recently the price of pig feeds has skyrocketed, prompting pig farmers to look for alternative ways of feeding their pigs.

For example, a piglet that is just 3 months cannot consume the same type and ration of feed as a 1-year old piglet. Therefore, the cost of feeds for piglets vary according to their ages.

How much does it cost to feed a pig for a day?

For adequate growth, pigs require proper feeding and medication. Feeds only suck their mother’s breast for 2 months, after this period, they must be fed with normal feeds by the owner. The earliest meal eaten by pigs is the Weaner mash which they feed on for two months.

After consumption of the winner mash for two months, the next type of meal is the pig mash feed. This is the meal the pigs will eat until they are finally sold.

On average, it will cost about 500 hundred Naira to feed one pig per day. However, this cost will be greatly influenced by the pig’s age and your chosen feeding ratio.

What is the cost of pigs in Nigeria?

The cost of a pig in Nigeria may vary by market and the size of the pig. However, an averaged sized pig will go for about thirty thousand Naira (N30,000) in most markets in Nigeria.