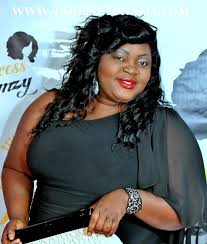 Eniola Badmus was born on 7 September 1983 in Ijebu Ode Local Government Area, Ogun State, Nigeria. She is a famous Nollywood actress and radio personality. Eniola has appeared in both Yoruba and English movies.

After Eniola completed her primary and secondary school education, she went to the University of Ibadan, Oyo State, and graduated with a Bachelor’s Degree in Theatre Arts.

Eniola Badmus proceeded to the Lagos State University and graduated with a Master’s Degree in Economics.

After completing her university education, the actress joined the Nigerian movie industry (Nollywood) in 2000. By 2008, she rose to fame after starring in the popular Yoruba movie “Jenifa” and “Omo Ghetto”. The two movies shot her to stardom and also won her the Best Actress Award (Yoruba) at the African Viewers Choice Awards.

She has appeared in more than 190 Nollywood movies which include Jenifa, Angelina, Village Babes, Mr. and Mrs. Ibu, Miss Fashion, Not My Queen, Battle for Justice, Wicked Step-mother, Police Academy, Child Seller, Blackberry Babes, Visa Lottery, Battle for Justice, and many more.

Eniola Badmus signed an endorsement deal with telecommunication giant Etisalat in March 2016, which worth millions of naira and automatically became its brand ambassador. She is currently married with beautiful children.

These are just a few of the numerous awards she has acquired over the years.

In March 2016, Eniola was unveiled as a brand ambassador for the telecommunication company, Etisalat.

Her net worth was recently estimated to be $1.2million, making her one of the richest actresses in Nigeria.

Many fans of Eniola Badmus were surprised when she announced that she will be embarking on a weight loss journey. Eniola who often speaks positivity about her body size (she’s big and beautiful) revealed that her plan was not to be too slim, but rather to be fit and look sexy.

The plus-sized actress who used to be trolled by fans for her voluptuous weight began to see positive results after her weight loss challenge.

She once spoke about few weight loss companies in the past as she posed as a challenge, that if their drugs work as they claimed, she’s offering herself as the ‘sacrificial lamb’ to be used for the company’s project.

Eniola Badmus is currently married with beautiful children. Moreover, she and some of her friends still visit a motherless baby home at SOS Children’s Village, Isolo, Lagos State – with lots of foodstuff and household items to the home.

Eniola Badmus is very influential in the Nigerian entertainment industry. She currently has more than 2.4 million followers on Instagram. Her Instagram handle is @eniola_badmus. You can also check her Instagram page here: www.instagram.com/eniola_badmus.

Eniola is currently married to a lovely husband. The name of her husband is Seyi. Eniola Badmus doesn’t always share much about her love life with the public. They are blessed with beautiful children.