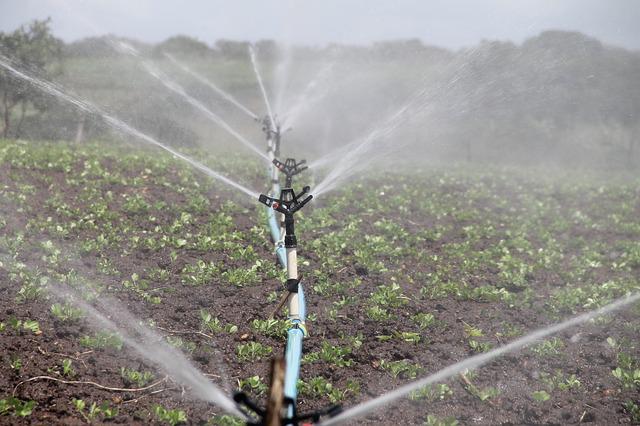 Instead of solely relying on rainfall, irrigation is the act of watering crops, pastures, and plants with water that is delivered by pipes, sprinklers, canals, sprays, pumps, and other artificial elements. In other words, because it is used as an alternative to rain-fed farming, it is a technique for a sophisticated watering system for assisting plants in growing.

It is also a method of meeting the water needs of plants or crops, as water is a vital resource for their growth. In addition, by allowing roots to penetrate dry areas, it helps produce large yields by supplying plants with the nutrients they need for growth and development.

In Q1 2022, the agriculture industry in Nigeria contributed more than 30% of the country’s GDP. Nigeria’s agricultural industry gains a lot from irrigation in a number of ways. In Nigeria, irrigation is crucial for a number of reasons, including increasing the amount of land that is suitable for agriculture and promoting crop development.

Importance of Irrigation in Nigeria

1. A source of water in periods of low rainfall

When there is not enough rain or when it is uncertain when the rain will fall, irrigation begins. The crops are negatively impacted in the absence of rain or irrigation, which may result in a food deficit or crop/plant failure.

For crops to prosper, they require enough water. When there is no rainfall or little rainfall, irrigation makes up for it. Water is a critical factor for growth; hence, a water shortage is detrimental to agricultural productivity. Farmers who have irrigation systems installed on their properties may rest easy knowing that their crops get the moisture and nutrients they need all year long. So, by using irrigation systems, the issue of crop failure or food scarcity caused by a lack of water in fields across the nation can be efficiently addressed.

2. More lands can be cultivated

Some soils are dry and stony, which makes it difficult for newly planted plants to survive. In dry locations, irrigation has helped to revegetate disturbed soils, converting them into cultivable land and increasing the amount of land that can be used for agriculture. Nigeria’s northern region experiences minimal precipitation, which causes aridity and desertification.

The country’s northern irrigation projects are responsible for improving the soil quality of dry land, which inevitably expands the amount of arable land available to farmers. Additionally, irrigation revitalizes fallow fields by supplying the soil with nutrients it needs for the upcoming growing season.

Regardless of the time of year or the weather, irrigation ensures that food production continues. This indicates that there is constant income and employment, which lowers poverty. The economy may continue to grow thanks to the significant increase in income brought about by irrigation. Food exports to other areas or nations also contribute to this.
The goal of irrigation is to maintain a consistent level of food production throughout the year. The agricultural industry will benefit from ongoing income and jobs as a result. All year long, farmers, farm laborers, and other allied workers profit from the ongoing production of food.

Without irrigation, farmers and laborers may endure income deficits or seasonal unemployment in dry seasons or when the land is hard from a lack of moisture, which always has a negative effect on the economy. Additionally, traders that deal in such agricultural produce may face an income shortfall during seasons of low rainfall if there is a shortage of food due to a lack of water needed to cultivate crops.

Additionally, irrigation makes sure that agricultural exports do not suffer during dry spells. Therefore, irrigation helps the Nigerian economy thrive by lowering unemployment and guaranteeing that farmers, farmworkers, and traders of agricultural products have access to revenue.

When crops or plants are watered infrequently and just with a hosepipe, the watering is not uniform, and they only receive one pass. This implies that locations that are difficult to access and those with irregular rainfall may not receive enough water. By utilizing effective irrigation technologies, such as drip irrigation, a well-designed irrigation system provides water even to difficult-to-reach sections of the land.

Because the farmer has no control over when and how long it rains, it may be difficult for him to provide his crops with the necessary amount of water for maximum growth. For instance, it might rain in the early morning, then get a little warm later, causing evaporation, which lowers the amount of water in the soil that crops can use. But with irrigation systems, the farmer can provide the right amount and timing of water to his crops. To improve crop output, the farmer can build up irrigation systems to give water to crops at periods when evaporation levels are low.

Large farm owners occasionally struggle with the issue of far-reaching crops in the field not receiving enough water. Water from the hose may not reach crops that are well out in the field when the crops are being watered. Additionally, this is not good for the crops. Systems for watering plants, like the drip irrigation type, are made to cover the entire planting area. As a result, the irrigation systems installed on the farm can provide a sufficient water supply for all the crops in the planting area.

6. It allows for multi-cropping

In the majority of tropical nations, the rainy seasons are cyclical, making the simultaneous cultivation of several crops impractical. Additionally, their water needs differ, and over-irrigation harms crop output. In most regions of the country, multiple crops can be grown at once with optimal irrigation.

Nigeria is a tropical nation with distinct rainy seasons, making it impossible to grow various crops at once. But in most areas of Nigeria, farms with irrigation systems installed can grow various crops simultaneously. As a result, the farmer will earn more money, and this will also benefit the farm employees and the local economy as a whole.

Desert ecosystems have adopted farming to increase food demands without only relying on precipitation due to the expansion of irrigated land. These regions produce food crops including grains, potatoes, and vegetables using groundwater from wells and aquifers, which helps them meet the global demand for food.

There will be greater demand for food as Nigeria’s population is expected to reach 216 million by 2022. Some issues that hinder efforts to achieve food security include insufficient rainfall and dry, uncultivable land. However, when irrigation systems are in place, crops will have access to moisture even during dry spells, and rocky, dry soil that is unsuitable for planting can be replanted.

Due to irrigation, a farmer may employ numerous farming techniques and year-round farming on a plot of land. Additionally, irrigation aids in raising cattle output. Irrigation, in essence, helps farmers increase agricultural productivity in order to fulfill the population’s rising food demands.

The best performance of animals is hampered during the dry seasons by the intense sun. Farmers who raise cattle frequently worry about the heat stress that their animals experience. Heat stress impairs appetites in dairy animals like dairy cows, reducing the amount of milk produced as a result.

Heat stress also impairs dairy livestock’s ability to reproduce, delaying lactation in addition to decreasing appetite. One of the tried-and-true techniques for reducing the heat on animals when the temperature rises is irrigation. Animals (cows, pigs, etc.) are periodically sprinkled with water by the sprinkling irrigation system, which helps the animals control their body temperature through evaporative cooling. When irrigation is used to manage heat stress in animals, such as dairy cows, they will produce more, which will increase the farmer’s income.

1. Rainfall that is inconsistent, insufficient, or uncertain frequently severely hampers agriculture. Agriculture can continue unhindered with the use of effective irrigation systems.

3. Because seeds need moisture to germinate, they cannot grow in dry soil. The necessary soil moisture for seed growth can be ensured with the aid of irrigation supplies.

4. Irrigation makes it feasible to grow several crops in one year. This will increase productivity and production. In many parts of Nigeria, two or three crops are grown with irrigation systems each year.

5. Hydrogen and oxygen are essential for the healthy development of plant roots, and they can be supplied through irrigation.
The watered soil’s mineral nutrients can be absorbed by plants. So irrigation is crucial for the plant’s overall growth.

6. Irrigation makes it feasible to cultivate a larger area.

7. Drought and famine may also result from not enough rain. During times of famine and drought, irrigation can provide protection.

8. Irrigation aids in the eradication of poverty and the expansion of the economy.