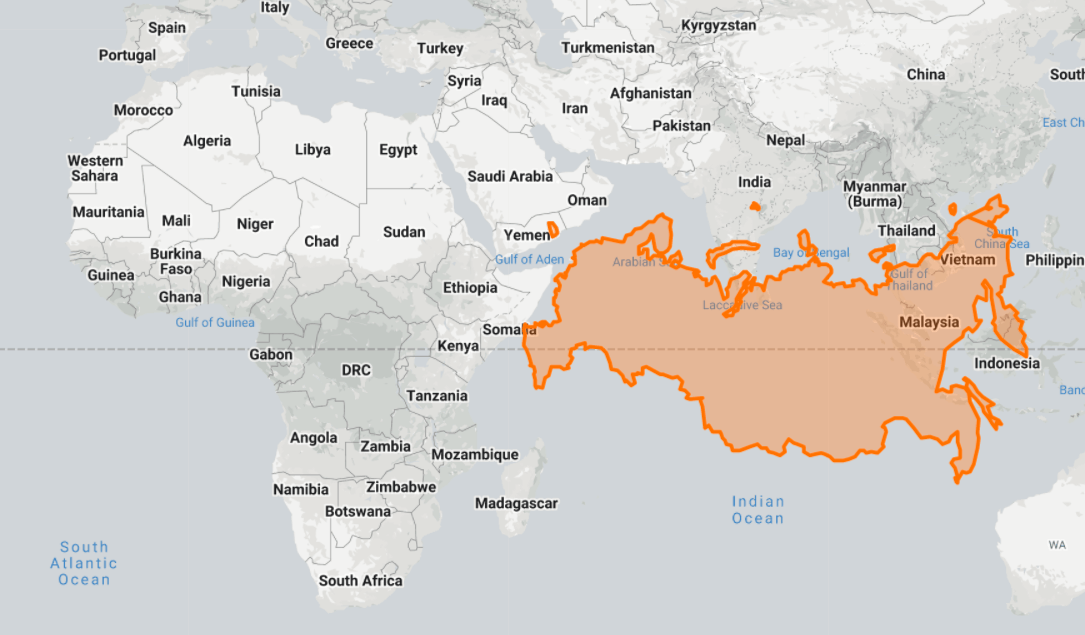 Contents hide
1 Size of Africa Compared to Russian by Landmass
2 Size of Africa Compared to Russia in Terms of Population
3 Comparing Africa and Russia in Terms of Economy (GDP)
3.1 Is Russia the Same Size as Africa?
3.2 How Much Bigger is Africa Bigger than Russian?
4 Why Africa is Bigger than You Think
5 Why does Russia Look Bigger than Africa on the Map
6 Is Africa Wider Than Russia
6.1 Author Profile
6.1.1 Latest entries
6.2 Related

Size of Africa Compared to Russian by Landmass

Africa is 1.77 times the size of Russia.

Africa is the second largest and populous continent in the world; right after Asia which tops the list.

The continent covers about 30.3 million km2 (11.7 million square miles) and it accounts for 6% of the total surface area on earth. In addition, Africa covers 20% of the earth’s land area.

Africa’s most populous country is Nigeria and the largest country in terms of the land area is Algeria.

Russia, on the other hand, is a transcontinental country in Eastern Europe and Northern Asia. Also known as the Russian Federation, the country stretches from the Baltic Sea, situated in the west, to the east where the Pacific Ocean is located. It also extends from the Arctic Ocean in the north to the south where we have the Caspian Sea and the Black Sea.

This accounts for over one-eighth of the inhabited land area on planet earth. This spans even time zones and borders 16 sovereign states.

Size of Africa Compared to Russia in Terms of Population

While the total population was about 811 million in 2000, it has continued to increase exponentially to 1.37 billion in 2021. The most populous countries in Africa are Nigeria, Egypt, and Ethiopia.

According to Worldometer’s elaboration of the most recent United Nations data, the Russian Federation’s current population is 146,034,128 as of Saturday, February 5, 2022.

The statistics above illustrate the size of Africa (in terms of population) as compared to Russia. Africa, which is a continent of its own, is larger than Russia.

Comparing Africa and Russia in Terms of Economy (GDP)

Is Russia the Same Size as Africa?

Africa is larger than Russia.  Flat maps distort the sizes of countries and continents due to the conversion of a spherical surface to a convenient rectangle.

The landmasses’ area seems to be growingly overstated as it moves closer to the poles.

How Much Bigger is Africa Bigger than Russian?

Africa is 1.77 times the size of Russia.

Why Africa is Bigger than You Think

The Mercator Projection, one of the most well-known and widely used world maps, depicts Greenland and Africa as around the same size.

In reality, however, Africa is 14 times larger than Greenland.

Why does Russia Look Bigger than Africa on the Map

The majority of people’s understanding of the relative sizes of countries is most likely based on maps rather than statistics.

The most common world map projection, the Mercator projection, distorts the size and shape of landmasses near the pole.

As a result, Russia appears to be larger than Africa when in reality, the continent can almost fit two sizes of Russia.

This demonstrates that when we represent countries near the equator on a map, we tend to underestimate their size.

The Mercator projection is a version of map projection that was invented by Gerardus Mercator in 1569.

It is commonly referred to as a cylindrical projection.

Is Africa Wider Than Russia

An accurate analysis of the both places shows that this question depends on where the measurements are taken. The widest part of Africa stretches from Guinea to the West, to Somali in the East.

When we superimpose the Map of Russia around this width, Russia is indeed wider than Africa. Now this is not by much but still, it is wider.