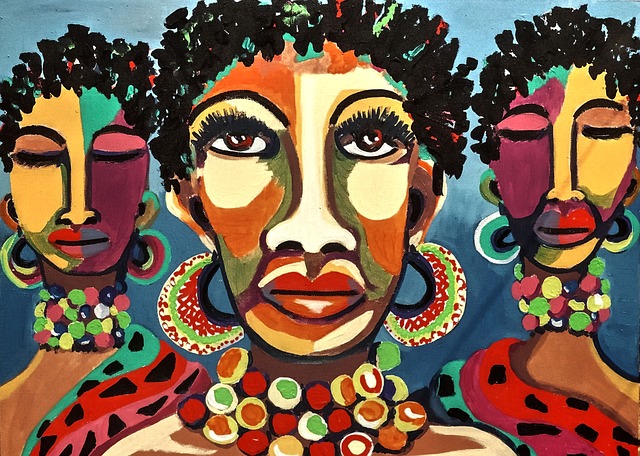 West African art is the art produced on the African continent, from the birth of man to the contemporary age. Although very varied, the art of Africa is often united by a strong religious sense, linked to the spiritualism of the different local faiths. The most commonly used colors are red, a symbol of fertility and life, and white and black, representing eternal life and darkness.

At the beginning of the twentieth century, many European avant-garde artists began to bring together African masks and statues; they generally left out the symbolic expressive traits, the religious myth and ideology, and interpreted only their external appearance, the aesthetics of the floors and volumes.

The growing presence of African art in Europe came at a time when many Western artists were searching for a new artistic vocabulary.

In Paris, artists from movements such as Cubism (think Pablo Picasso) and Fauvism, in which Henri Matisse participated, rejected realism in favor of bold colors and shapes. Picasso and Matisse collected African art, with the latter traveling to North Africa in 1906. In Germany, expressionists such as Emil Nolde wanted to explore human psychology and mental states through art, ideas that are not effectively conveyed by copying nature.

These artists were very inspired by African art, especially sculpture and masks, even though they may not have known what the objects meant to the people who made them.

The show’s title reflected the bias of the time: African Savages’ Statuary in Wood: The Root of Modern Art. But the show, which included objects from Gabon and the Ivory Coast, brought the public into contact with African art.

In 1925, African-American philosopher Alain Locke called for an exploration and celebration of art based on African identity and heritage, to bring a revival to African-American art and culture.

It was the beginning of the Harlem Renaissance. African-American artists such as Romare Bearden and Malvin Gray Johnson, then living and working in New York, followed those calls and used ideas related to African art in their work. One example is Johnson’s 1932 painting of African masks. In his title, Black Masks, he connected objects with meaning (history and heritage) significant to his community.

They are done in an angular but still-observed way by him with traditional African cloth as a background.

And African arts and culture have deeper currents of connection to American culture.

The African slave trade forcibly brought people from many African cultures to the colonies. Many brought their artistic traditions with them, and some of those practices exist today. The Kongo people of the lower Congo made baskets by intricately weaving herbs into an airtight, waterproof container. When the people of these cultures were captured and taken to the rice plantations of the southern Atlantic coast, they used similar materials to keep the practice of weaving alive.

Similar work can be seen today, reflected in the beautiful sweetgrass baskets made by women from the coastal lowlands of South Carolina and Georgia. They are an enduring symbol of African influence, regardless of the turmoil that brought it so far from home.

Due to colonialism and slavery, African art found its way around the world.

First introduced as curiosities of wild cultures, objects such as masks and sculptures influenced European artists in search of a new vocabulary that was not based on realism.

Movements such as Cubism, Fauvism, and Expressionism were influenced by African art, incorporating elements such as dissonant colors, geometric shapes, and fractured or distorted human forms. In the United States, African art played a role in the Harlem Renaissance and in traditional crafts still practiced by people whose ancestors had been slaves.

Function that the visual art serve in West Africa

Visual art in Africa serves different vices. While some, such as fabrics and baskets, serve for basic needs such as clothing and transportation, others are used for various ceremonies and rituals in honor of royalty, ancestors, or even spirits.

The written and oral traditions of Africa educate us about the heritage and culture passed from one generation to another, inspiring us with stories of the past, present and futuristic events.

At a time when the dominant discourse of the last twenty years is bearing fruit, practically succeeding in making the civilizations of the New World take their source in the slave plantation, thus valuing the process of creolization and minimizing the African civilizational contribution, it is appropriate to highlight the permanence of the African ancestral continuum in the social and cultural practices of the said civilizations.

As for all societies of orality, the tale of oral tradition was the first educational lever of the societies resulting from the slavery plantation. Generally related to the African oral tale because of the conditions of its creation, its social function, and the artistic rules to which it adheres, it is certainly the most eloquent reference for evoking the heritage of the Negro peoples of the Americas.

Research, by means of a comparative approach, into the nature of the links which unite the American continent and the African continent in this practice of socialization will indeed make it possible to measure the impact of the areas of African civilizations concerned in the construction of identity, in perpetual questioning of the peoples of the Black Americas, but also identify the consequences of the process of creolization.

Since the end of the 19th century, the oral tradition and, in particular, the tale have been an object of study, so much so that the folklorists Aarne and Thompson have drawn up an index of typical tales in order to better classify them and identify their origin.

This index from the current of European “diffusionist” folklorists has served as the basis for almost all the studies carried out since on folk tales.

Despite the insufficiencies and inaccuracies of this empirical work, researchers have benefited from a canvas allowing them to identify or dispute, according to the motives and themes, the course of European and American standard tales, classified into several categories: animal, marvelous, supernatural tales, etc.

Other studies have shown the richness of the oral tale as a staging of the daily life of the societies that made it, as well as an expression of the social codes of said societies.

The African and American oral tradition tales have not escaped this research dynamic and have obeyed the same rules, so much so that analytical grids such as those proposed by Wladimir Propp, a Russian folklorist from the structuralist school, do not have any difficulty in being applied to them. This amounts to emphasizing the universality of oral traditions and, above all, the universality of human behavior.

This also reminds us of the fact that the existence of man is oral and that the oral precedes the written. All so-called civilized societies have therefore gone through this phase. Only the obstacles of history have prevented certain societies from evolving towards their destiny.

The deportation of millions of Africans to the New World, the laws and provisions taken by the metropolises and the European colonists did not succeed in altering the human value of these deported individuals, and it is in a legitimate way that the tale of African oral tradition has crossed the ocean.

The idea that the “abyss,” even though it was painful, would have made the Negro forgetful, made him a migrant without a history, is thrown out by the fact that the Negro people of the Americas still use ancestral African codes in everything they make.

The oral tradition in the Americas, and in particular tales and proverbs, as the first educational lever within the slave plantation, is therefore part of the cultural and civilizational continuum of Africa.

Plantation society, and especially creolization, a process of domination and socialization of enslaved African deportees, modeled tales and proverbs according to the interests of the dominant group without modifying their structures, especially the main social and cultural functions of the oral tradition. The deported Africans, kept orally for the economic and strategic needs of power, have therefore impregnated the new American societies with their souls.

The Bambara or Mandingo area of Mali and Senegal revealed the richness and variety of tales, proverbs and riddles, the complexity of myths, legends and genealogies, thus highlighting the high degree of civilization reached by these major linguistic and cultural groups at the time of first contact with Europeans.

By means of a comparative approach and relying on two essential points, the meaning of the word in the oral tradition and the socio-cultural function of the tale of oral tradition, we will attempt, without concern for exhaustiveness, to show that the traditional language of the Americas has inherited a great deal from Africa.