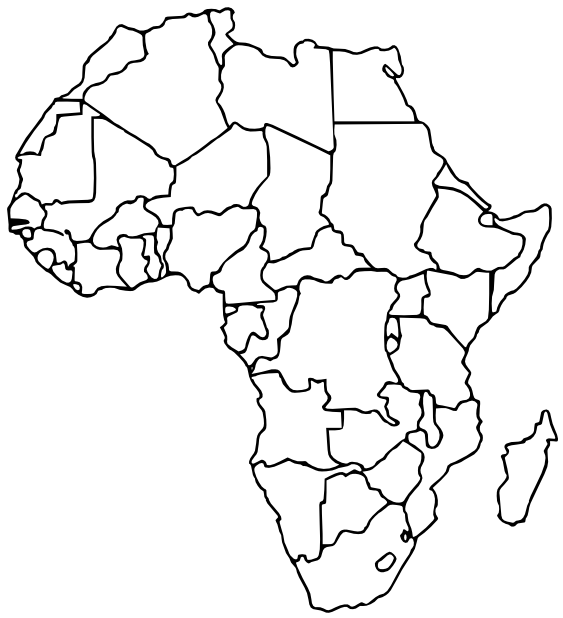 As in many moments in the history of humanity, slavery was also an institution present in some civilizations in Africa. Since remote antiquity, slavery was practiced on the continent, just as it had been practiced in Greece, Rome, feudal Europe (in a residual form) and in the East.

But the internal slavery of the African continent was different from the slave trade that came into force after the conquests of African territories by the Portuguese and other European peoples from the 15th and 16th century onwards. The main difference was that slavery in Africa did not have the commercial character adopted after the development of the slave trade across the Atlantic Ocean.

One of the systems that existed in black Africa was the jonya, widespread in western Sudan, Niger and Chad. The jon was the captive, a slave linked to a lineage and who could not be ceded or sold, having the right to most of what he produced. In this system, it belonged to the State and its political apparatus.

Among the Cubans, for example, there was only sporadic sale of slaves. The population increase also represented the increase in the power of the monarch, which led to the stimulation of the procreation of slave women. Their children were born free and their grandchildren were incorporated into society. Due to these factors, the sale of slaves was almost non-existent.

Skilled workers who were slaves were also not sold in many African societies. Commercial slavery, which in some places replaced jonya , began to gain strength with the Islamization of some areas of the African continent, mainly in the North.

However, mass enslavement occurred with the opening of trade routes across the Atlantic. The commercial connection of the African continent with Europe and America turned the slave into one of the main export products, generating great profits for the elite of several African societies.

This situation increased the number of slaves compared to the old systems existing in Africa and ensured the exploitation of the vast territories newly discovered in America.

Contents hide
1 Who first started slavery in Africa?
2 Where were the slaves taken to?
3 What purpose did the slaves serve?
4 How African slaves were captured
4.1 War
4.2 Raids
4.3 Commerce
5 Places were slaves were first captured in Africa
6 Countries that captured the slaves in Africa
7 Who started slavery in the world?
8 Food that slaves ate in captivity
9 Profile of the African queen who sold slaves.
9.1 The negotiation against Portugal
9.1.1 Author Profile
9.1.1.1 Latest entries
9.2 Related
9.3 Related Posts:

Who first started slavery in Africa?

In Africa, slavery was not unknown before the arrival of the Europeans. Unlike ancient Greece, for example, where the slave was assimilated to the category of “thing”, in this continent the slave had civic rights and property rights, and there were also multiple emancipation procedures.

There is a generally distinguishment of slaves into house slaves and war slaves, although the latter ended up in the former category after a certain time. In general, in Africa, a slave was quickly integrated into the family that owned him/her.

Officially, slavery in Africa began with when the Portuguese emissaries expanded overseas and penetrated the borders of Africa, during the 15th century. Coming under the guise of civilization, the Portuguese soon began to kidnap people from the west coast of Africa and transport them to Europe as slaves.

Where were the slaves taken to?

At first, the slaves captured on the continent were mainly destined for the sugar cane plantations of São Tomé and Príncipe, and later on to Cape Verde.

Trafficking to the Caribbean began in the early 16th century.

The Spaniards also resorted to African slaves because the local population had been decimated by violence and disease.

What purpose did the slaves serve?

Slaves worked in the household and in agriculture, but were also integrated into the traditional state apparatus as docile officials.

The Spanish and Portuguese conquerors, at first, used slaves to cultivate the large plantations and work in the mines, but over time, these “inexhaustible goods” ended up running out due to the harsh working conditions, the miserable food, poor hygiene conditions, harsh punishments, lack of immunity against European diseases, in a word, the harsh living conditions to which they were subjected.

The collapse of the indigenous populations (total in the Antilles and partial in the American continent) caused an increase in the number of slaves, the relationship was directly proportional: the more slaves died, the more they were needed.

It is estimated that around 40 million Africans were kidnapped and enslaved.

But only one in four survived capture in Africa, the ordeal of being deported from the interior of Africa to the coasts, and finally the gruesome hardships of the crossing.

How African slaves were captured

When the European slavers hit the West African shores, they did not capture the slaves themselves. They were brought to them by, for example, African tribal chiefs or noble families who profited from the slave trade and controlled the African hinterland.

In fact, the existence of slavery, the slave trade, and wars in Africa prior to the appearance of Europeans in the first place was the premise for the Atlantic slave trade.

Without African elites, none of the European powers could have had access to slaves from the interior of Africa, or even remotely successfully engaged in the slave trade. Other methods employed for capturing slaves included;

One weakness that was employed to exploit Africans by Europeans was through war. While the nations, communities and people fought, the European used this opportunity to attack and kidnap those left behind since there was close to no defense to stop them.

Alternatively, the Europeans could wait for the triumphant side to return home with the spoils of war which included slaves, before proceeding to buy them away.

Many African slaves were raided even when it wasn’t a time of war, and forcefully yanked into slavery. If a town came on as particularly weak or few, the Europeans could proceed there with advanced weapons and man power to force them to succumb.

The richest nations in Africa transfected with Europeans, using slaves to exchange for  weapons, tobacco, alcohol, textiles, and grain, among other items. Debt slaves, delinquent slaves, or other punishable behaviors were handed over to Europeans in exchange for valuables that could not be found in Africa.

Places were slaves were first captured in Africa

Between the fourteenth and twentieth centuries, for example, nearly a third of the population of Senegambia lived in slavery. The same happened in the empires of Ghana, Mali, Bamana and Songhai.  Half of Sierra Leone’s 19th-century population was made up of slaves.

Similar percentages were found among the Duala (Cameroon), the Igbo (Nigeria), in the kingdoms of the Congo and in various Angolan kingdoms. Between 1750 and 1900, two-thirds of the Fulani population was made up of slaves. Just as high were the percentages of slaves among the Swahili and the various Malagasy ethnic groups.

Countries that captured the slaves in Africa

Over the years historians have argued a lot about the number of slaves that became involved in this brutal trade. The documents available were mainly logbooks, so they cannot be considered exhaustive.

However, considering also those people who died during the trafficking, this has roughly reached a number of 12 million.

To this we must add that the number of slaves taken away varied from one area to another, therefore it damaged one territory more than another.

The Portuguese, Dutch, British, French and other European nations benefited from the trade. Recall that the areas affected by this phenomenon were Senegambia , Guinea , the Gold Coast (now Ghana) and above all that area called the Slave Coast from Dahomey to the mouth of the Niger River.

Then we went further south in the Loango region , in what was the French Congo , then the Congo colony of Belgium and Angola the Portuguese colony.”

Who started slavery in the world?

The institution of slavery was completely assimilated, it was not questioned. Aristotle (represented by Raphael in the center of the scene, along with Plato), like most ancient thinkers, defended its necessity: his concept of a democratic society, made up of free citizens, was compatible with slavery, which he considered essential for proper social functioning.

The influence of his ideas endured through the centuries; it was reflected in the Corpus Iuris Civilis (the most important compilation of Roman law), which in turn, during the Middle Ages, influenced the legislation of the new European kingdoms, and from the 16th century it served to justify the formation of slave societies in the new American colonies.

Food that slaves ate in captivity

Cassava flour was the basis of the slaves’ diet. Regarding the food of the captives, slaves were fed with manioc flour, beans, jerky, bacon, bananas and refreshing fruits.

The act of cooking cornmeal in water, without adding salt, that this kind of coarse polenta is made, called angu, and constitutes the main food of the slaves. On the other hand, instead of manioc flour, corn flour was almost exclusively eaten. In Rio de Janeiro, manioc flour figured in the food of the slave alongside the black bean, which had taken on prominence since the end of the 18th century.

The slaves on the plantations were fed with two handfuls of dry flour, moistened in the mouth by the juice of a few bananas or oranges.

Likewise, among the popular classes, manioc flour, oranges and bananas were eaten.

Profile of the African queen who sold slaves.

Queen Njinga Mbandi was the leader of the Mbundu people and queen of Ndongo and Matamba in south-west Africa.

This new denomination arrived in 1575, when soldiers from Portugal invaded Ndongo in search of gold or silver. Not finding the mines they were looking for, they decided to change their strategy and start trading slaves to guarantee labor in Brazil, their new colony.

Njinga, who was born eight years after this invasion, fought against the Portuguese from her childhood together with her father, King Mbandi Ngola Kiluanji, pushing them further from enslaving the region easily.

However, when the king died in 1617, it was another of his sons, Ngola Mbandi, who assumed power. However, he did not have the charisma of his father nor the intelligence of his sister, Njinga .

But when he found himself unable to stand up to the Europeans, who were gaining ground and taking more casualties among the local population, Mbandi ended up accepting advice from his closest advisers to surrender the throne to Njinga.

The negotiation against Portugal

Upon assuming power, Njinga who was a renowned strategist and effective communicator that understood Portuguese, thanks to the education she received from missionaries,  she began to negotiate with the Portuguese emissaries, with the aim of signing a peace agreement.

When she arrived Luanda to start the talks, she found a city populated by black, white and racially mixed people than she had never seen before. But that was a tip of the iceberg.

She saw slaves in queues,  sold and placed on large ships, and until then did she verify that Luanda had become one of the largest points of sale and exit of slaves in all of Africa, all within a short period.

After arduous negotiations, both parties agreed that the Portuguese troops should be withdrawn from Ndongo and recognize its independence. In exchange, the Portuguese would get a specific amount of slaves, and create trade routes. However, the cordial relations lasted for only a few years before clashes resumed.