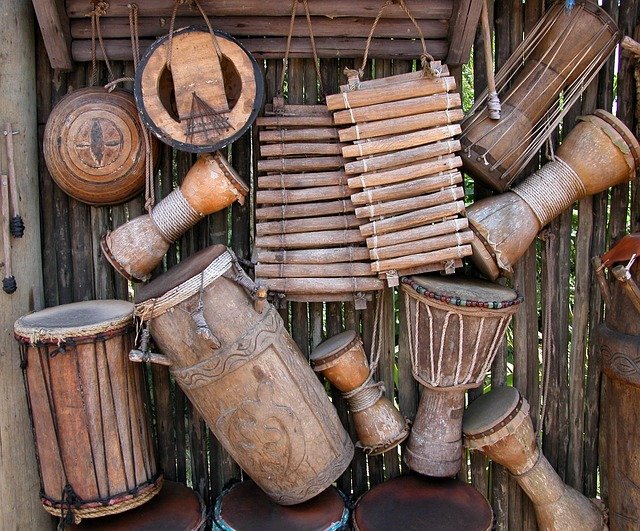 In Africa, traditional music (but not only) is characterized by the use of particular musical instruments, often produced with natural materials such as pumpkins, horns, skins, and shells, although a wide range of artificial materials are currently in use, mostly aluminum or metal, such as cans, strings, bottle caps, and bins.

Musical instruments include a vibrating mechanical system: the exciter (string, whistle, or reed) is coupled to a resonator (the air from a box or a tube) which it puts into forced oscillation. This produces the sound wave with sufficient intensity for it to be audible.

In addition to instruments in the proper sense, a series of objects, although not classifiable as instruments, are in fact played and defined by these same populations as “rhythmic instruments,” such as rattles, pendants, whistles, bracelets, shells. Finally, bells of various sizes and materials have a wide range of applications.

What are the African musical instruments?

Apart from the voice, which to a great extent has developed to be diversified for different techniques such as melisma and modeling, African music has also increased in having different musical instruments.

These musical instruments include different drums, maracas or kashakas, and gonkoque, without forgetting other melodic choices which comprise string instruments (such as; musical bow, kora, or fiddles, (which includes different types of harps), different xylophone types, such as thembira, and other wind instruments that comprise of trumpets and flutes.

How are African instruments made?

There is plenty of information about why practicing a musical instrument is beneficial, both for an individual in growth and formation, as well as for adults and the elderly.

But even more interesting is to build your own instrument and learn more deeply how sound is generated, through the materials and the shape that the craftsman gives it.

There is opposition, in whether an instrument is more valued if it is manufactured in an artisanal or industrial way, based on the quality of its sound and the preference of the musicians.

What is magnificent is to familiarize yourself with the instrument because you have created it with your own hands, in addition to enriching your knowledge in the search for the perfection of musical knowledge.

Materials for African musical instruments are usually crafted from nature, and they include animal horns, skins, gourds, wood, turtle shells, and other manmade materials, such as scrappy metals from cars and oil drums.

The most distinctive feature of African musical instruments

The most distinctive feature of African musical instruments is their capacity not to make music alone, but also the capability to communicate with both the physical and metaphysical phases of mankind whilst translating events and experiences without hassles.

Musical instruments are used for entertainment and as a means of communication, whether between humans and the divine or between humans themselves. Instruments can call spirits or even make people hear the voice of an ancestor or a deity.

Usually, one associates the drums with African music. However, there is such a wide variety of instruments in Africa that the drum is actually only a small part of the selection.

The importance of different instruments varies from tribe to tribe. For example, an instrument may serve as a pastime in one tribe and represent the voice of a spirit in another.

It is impossible to list all types of instruments in Africa as there are many different types and each type of instrument is different from the next as Africans build them or have them built according to their own needs.

There are 5 sets that make up the vocal forms of African music. They include:

This form of music first came to play in the African state of Pernambuco, blending strong African percussion rhythms with instruments that comes with Portuguese melodies. Maracatu emerged in Pernambuco, and the first records of the folkloric manifestation date back to 1711.

Through dance, music, and religion, maracatu was born from the mixture of African, indigenous, and European cultures, more precisely Portuguese culture.

Talk about a musical form that originated during the late 19th century with deep roots in the origins of African-American worlds. It was the kind of music that slaves and their descendants sang while they continued with their work.

However, over the years, Blues has evolved from the isolated black man’s vocal music to diverse subgenres and styles, with regional varieties throughout Africa and beyond.

Soul is a popular music genre that combines elements of African-American gospel music, rhythm and blues, and sometimes, jazz. The fancy rhythms are usually followed by extemporaneous dances and handclaps that make it an extraordinary feature.

Religious music, or sacred music, includes musical genres associated in one way or another with the religious practices of a given social group. The concept is therefore opposed to that of secular music.

This form of music is a succession of two musical phrases, the second phrase being a comment or response to the first. Call and response, which sounds like a conversation, is a common part of many types of music.

The call and response can take different forms: imitation between two instruments, question/response or even varied responses to the same call.

There are lots of features that come with music and art, but within the African sphere, there’s a bigger picture. Highlighted below are some of the characteristics that make African music distinctive:

In Africa, traditional music is characterized precisely by the use of particular musical instruments, often produced with natural materials such as pumpkins, horns, skins, and shells, although a wide range of artificial materials is currently in use, mostly in aluminum or metal, such as cans, strings, bottle caps, and bins.

In addition to instruments in the proper sense, we find a series of objects which, although not classifiable as instruments, are in fact played and defined by these same populations as “rhythmic instruments,” namely: rattles, pendants, whistles, bracelets, shells, etc.

Among them, one of the oldest was the bow, which in addition to its function as a weapon, in the case of the Bushmen, thanks to the plucked or touched string, amplified by wooden vases or empty gourds placed at the end, also assumed the role of an instrument.

Music is still extremely functional in African life today, always accompanying the most important moments of life, such as birth, marriage, hunting, and even political activities.

Many songs and musicals are just for fun, from simple stories to elaborately choreographed musicals.